The James Cook set off bright and early at 9am this morning on expedition JC180, better known as the “Controlled Release Experiment.” Despite the brisk conditions the team braved the deck to wave farewell to National Oceanography Centre in Southampton, mentally going through their packing lists for the hundredth time to make sure they really hadn’t left anything behind. We’re now ready and raring to go!

Farewell! The RRS James Cook leaves the dock outside NOC in Southampton

Life on the ocean wave: great views of the Isle of Wight as the ship passes down the Solent

The science and engineering teams were treated to a full tour of the ship, for us this is our home for the next 35 days. Highlights included the bridge, the gym and – most importantly – the mess. 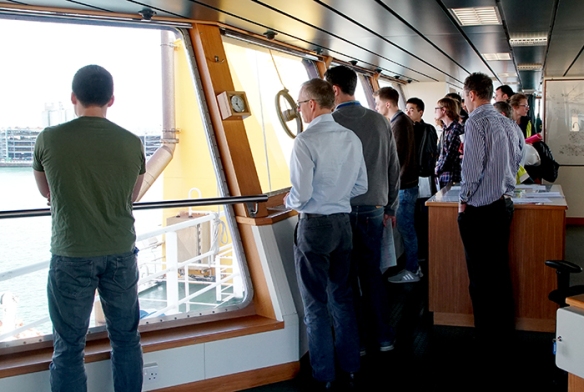 After this, teams started getting to work on all their various pieces of equipment … until the muster alarm sounded at 1pm. The busy murmuring of the crew was shattered by seven short and one long blasts from the ship’s horn – the general alarm. People quickly gathered their life jackets and assembled at their designated meeting points. Fortunately, this was just a practice, ensuring everyone knows what to do in an emergency situation.

The most important part of our first day at sea: the safety drill

Finally, to round off what had already been a busy first day, Chris Pearce led the first science meeting of the expedition. Covering the next 34 days of activity and going through each team’s responsibility in detail, it means everyone is now fully prepared for the weeks ahead.

Heads down: Chris Pearce convenes the first science meeting of the expedition