We arrived at our first work site early this morning and quickly set to work. There’s an incredible amount of work everyone needs to get done in such a short length of time but everyone is valiantly rising to the task.

All systems go: Teams hard at work getting kit ready for deployment. From left: the seabed lander; making sure the acoustic releases work; last tweaks to ROV Isis before she gets her toes wet.

The earliest part of the day was spent deploying various water profilers such as the SVP (sound velocity profiler) and current meters. Each was lowered over the side of the boat via a small crane, and then a large rope lowered them over 100m to the seabed.

Preparing the velocity profilers for launch

In the afternoon the baseline lander was deployed – this is the piece of equipment that will make all sorts of environmental measurements during the experiment. This deployment is thought to be the largest number of lab on chip and acoustic sensors ever attached to a single lander. These sensors will gather background information on what the chemistry of the seawater at the bottom of the North Sea is normally like – so that any change that occurs as a result of our release experiment can be easily detected.

Splashdown: the seafloor lander is lowered into place by the ship’s crane

First @STEMM_CCS_EU deployment from the #RRSJamesCook! Release of the Baseline Sensor Lander that contains the largest number of @NOCnews @biogeosensing lab on chip sensors ever deployed on one lander. 👏👏👏 pic.twitter.com/zWLsPMFxG4

Finally, and ahead of schedule, the Remote Controlled Vehicle (ROV) ISIS was deployed. No scientific equipment was attached however as this was just a test to ensure everything was ready for the coming weeks of work.

Deployment of ROV Isis with the Goldeneye platform in the background

And some breaking news…the ROV found the seabed lander that was deployed 18 months ago! Great news for the project – it has resisted being discovered during previous recovery attempts! Smiley happy faces all round on the ship – and back on shore – a great finish to the first day of work! 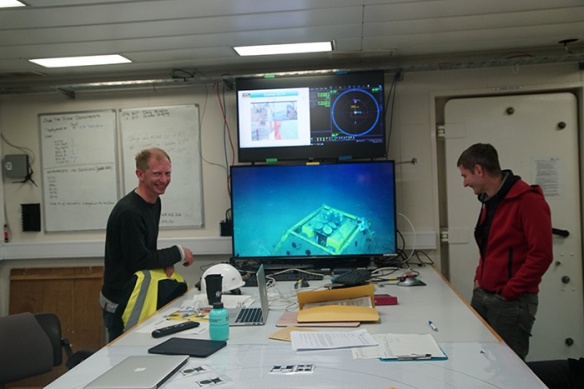 Big smiles: Dirk and James are reunited with the Devologic seabed lander – albeit via video feed from ROV Isis to a flatscreen TV!