Today was our last day of work at the Goldeneye site and we certainly made the most of it. We kicked off the morning with the long-anticipated recovery of the lost Devologic lander. An acoustic release was used to activate the floatation device that ISIS attached yesterday. Once on the surface, the crew fished it out of the water and pulled it on board with the ship’s A-frame crane. And when I say fished, I mean that quite literally! It appears a few fish had made their home in the lander and were rather reluctant to leave. No worries though as the crew was able to evict them and release them back into the sea. 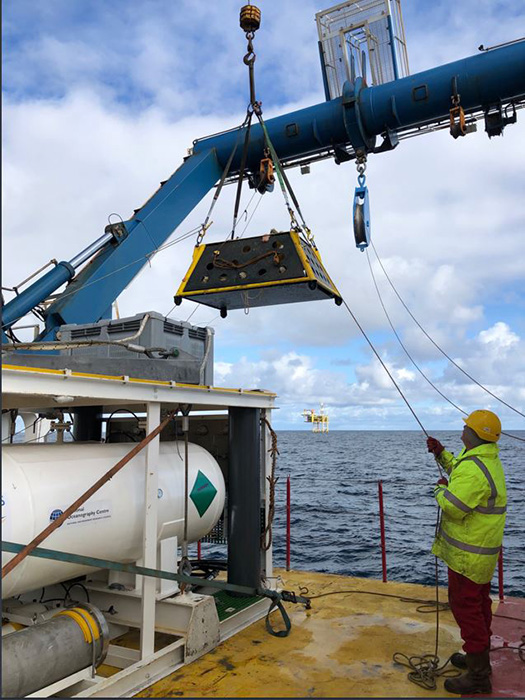 After a long stint on the seafloor, the lander is finally back in our hands!

Complete with a passenger, who was duly released back into the sea!

Of course what better way to bookend the expedition than with one last Gavia AUV deployment. Freya returned to the release site one last time to carry out a final survey which will hopefully reveal how the area has reacted to the gas flow stopping.
And with that we’re done, we’ve accomplished everything we wanted to do – and a little more – in what has surprisingly been a relatively painless experiment. The Goldeneye platform has become a familiar site over the last month and we’re all a little sad to see it go but we’re steaming back to Southampton to move on to the next stage of the STEMM-CCS project.